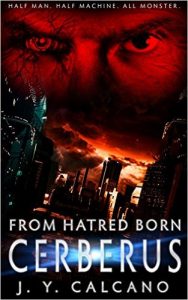 Grade B-   (see how Thomas grades)

Overview:  I picked this novel up at Origin’s Game Fair as an ebook from the novelist himself. I couldn’t resist the title. While the writing tended to obscure the author’s meaning at times, I still found this a good novel, with a gritty, real feeling dystopian future. The plot was unforced and kept my interest all the way to the final scene.

A mass murder has been used for corporate experimentation so long he can’t remember who he is or who is inflicting the almost continuous pain.  He is offered, by a mysterious and unknown voice, the opportunity to gain revenge. He agrees starting him on a journey of death, destruction, on a goal that is totally repugnant to him.

Loved the twist to the main character. A mass murder merged with a nano creature and each forced to suffer the illogic and emotions of the other – fabulous!

The twist of the revenge (no I won’t spoiler) is too good for words. I love GOOD plot twists as much as I despise the bland sameness of much of fiction.

Very compellingly awful world, the perfect setting to a less than perfect anti-hero.

Tying in with the above was the characters themselves. There were two female characters that while they had different names really didn’t stand out as differentiated from one another. I floundered trying to understand either of them when my mind couldn’t separate them.

I mentioned plot twists in the good. There was one that I considered bad. The final scene tossed in a new character, a new situation that threw me for a loop (and not in a good way).  There was no foreshadowing and no discussion of this other character or predicament that I recall. Worse it was a blatant setup for a sequel. I wouldn’t have objected if it were a prologue (with a bit more information) or if it were hinted at through the story. As it stood I felt I was smacked with a club with no warning.

This review is by Thomas Gondolfi, Author of Toy Wars Series the CorpGov Chronicle and numerous pieces of short fiction in the genres of science fiction and cyberpunk. He is also the owner of TANSTAAFL Press (How do you like your SciFi? ). For more bio information go to  www.tanstaaflpress.com/authors/biographies/tomgondolfi/