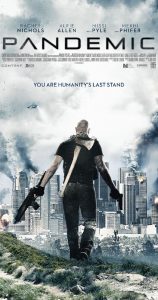 How not to do a movie!

Overview: Watched this on Netflix and wish I could get that hour and a half of my life back. At least I didn’t spend any money on it. Now I’m not a big fan of zombie anything, but the title didn’t jump out to me as a zombie apocalypse movie. I thought I was in for a low budget remake of Outbreak even though the guns on the cover should have given me some clue.

Wish they would have spent the money making the movie on something real, like cancer research or the Wounded Warrior Project instead of throwing it away on this dreadful piece of rubbish.

Please don’t waste your time unless you are a diehard zombie fan, and even then prepare to cringe through most of the movie.

A group of survivors, centering around a strong male lead played by Paul Guilfoyle (from CSI fame), continues to forage and gain uninfected survivors in the Northern LA area. After the loss of one group, who report nearly 100 uninfected survivors holding up in a school, our strong leader sends out a four person team to rescue the uninfected but with strict instructions to ignore trying to save the other team OR any persons they have known before the outbreak.

The POV filming in spots really added to the level of creepy and added suspense. I wish it had remained in POV to bring the level of this movie up.

As a former resident of the L.A. area, I loved seeing things there blown up and abused. However even this was limited as I didn’t see any major landmarks.

SPOILER:  Loved the scene where the infected stake out a single uninfected to a grate in the middle of the street as bait in an ambush. Wonderfully done. One of the highlights of this movie.

Where do I start when everything was so bad?

The four-person team consisted of ONE gunner (Really? Only one?), a driver, a doctor and a navigator. While I’m all for specialization, there has to be some cross purposing here. Each of them has their own agenda which matches not at all with their mission parameters. And why only four? All I will say is that I saw at three redshirts even before the movie started.

The fight scenes were only fair and the special effects weren’t anything to write home about even for an amateur production. About the only cliché about horror / zombie movies I didn’t see in here was someone showering / having sex.

I couldn’t fathom why the survivors would allow the mass of infected around their camp. Easy enough to destroy making transit so much safer and not risking the compound.

This review is by Thomas Gondolfi, Author of Toy Wars Series the CorpGov Chronicle and numerous pieces of short fiction in the genres of science fiction and cyberpunk. He is also the owner of TANSTAAFL Press (How do you like your SciFi? ). For more bio information go to  www.tanstaaflpress.com/authors/biographies/tomgondolfi/